A Domestic Violence Victim Shares Her Story of Survival and Rebuilding 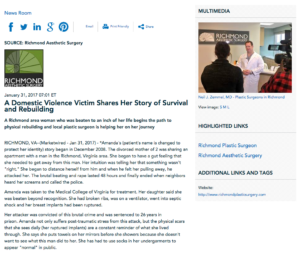 A Richmond area woman who was beaten to an inch of her life begins the path to physical rebuilding and local plastic surgeon is helping her on her journey.

Richmond, VA—*Amanda’s (patient’s name is changed to protect her identity) story began in December 2008. The divorced mother of 2 was sharing an apartment with a man in the Richmond, Virginia area. She began to have a gut feeling that she needed to get away from this man. Her intuition was telling her that something wasn’t “right.” She began to distance herself from him and when he felt her pulling away, he attacked her. This attack lasted 48 hours and finally ended when neighbors heard her screams and called the police.

Amanda was taken to the Medical College of Virginia for treatment. Her daughter said she was beaten beyond recognition. She had broken ribs, was on a ventilator, went into septic shock and her breast implants had been ruptured.

Her attacker was convicted of this brutal crime and was sentenced to 26 years in prison. Amanda not only suffers post-traumatic stress from this attack, but the physical scars that she sees daily (her ruptured implants) are a constant reminder of what she lived through. She says she puts towels on her mirrors before she showers because she doesn’t want to see what this man did to her. She has had to use socks in her undergarments to appear “normal” in public.

Over the last several years, she asked multiple plastic surgeons if they could help her physically be whole again, but none were in the position to do so until she met Dr. Neil Zemmel. Her story touched the Richmond plastic surgeon, and he wants to help her overcome some of what she lived through. He is taking her on as a patient and is performing her surgery at no cost, as she doesn’t have the ability to afford the procedure.

Amanda is sharing her story of survival and rebuilding her life on WWBT/ NBC12 Richmond. She wants women to understand that rape can happen at any age and by someone you know or have a relationship with.

Her story will air February 02, 2017 @ 5pm on WWBT/NBC 12 Richmond. The day the story airs, NBC 12 will offer a Domestic Violence hotline and have counselors on the premises to assist viewers who may need help.