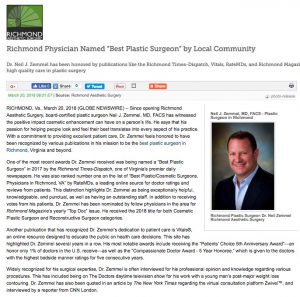 Dr. Neil J. Zemmel has been honored by publications like the Richmond Times-Dispatch, Vitals, RateMDs, and Richmond Magazine for his dedication to providing high quality care in plastic surgery.

Richmond, VA — Since opening Richmond Aesthetic Surgery, board-certified plastic surgeon Neil J. Zemmel, MD, FACS has witnessed the positive impact cosmetic enhancement can have on a person’s life. He says that his passion for helping people look and feel their best translates into every aspect of his practice. With a commitment to providing excellent patient care, Dr. Zemmel feels honored to have been recognized by various publications in his mission to be the best plastic surgeon in Richmond, Virginia and beyond.

One of the most recent awards Dr. Zemmel received was being named a “Best Plastic Surgeon” in 2017 by the Richmond Times-Dispatch, one of Virginia’s premier daily newspapers. He was also ranked number one on the list of “Best Plastic/Cosmetic Surgeons, Physicians in Richmond, VA” by RateMDs, a leading online source for doctor ratings and reviews from patients. This distinction highlights Dr. Zemmel as being exceptionally helpful, knowledgeable, and punctual, as well as having an outstanding staff. In addition to receiving votes from his patients, Dr. Zemmel has been nominated by fellow physicians in the area for Richmond Magazine’s yearly “Top Doc” issue. He received the 2018 title for both Cosmetic Plastic Surgeon and Reconstructive Surgeon categories.

Another publication that has recognized Dr. Zemmel’s dedication to patient care is Vitals®, an online resource designed to educate the public on health care decisions. This site has highlighted Dr. Zemmel several years in a row. His most notable awards include receiving the “Patients’ Choice 5th Anniversary Award”—an honor only 1% of doctors in the U.S. receive—as well as the ”Compassionate Doctor Award – 5 Year Honoree,” which is given to the doctors with the highest bedside manner ratings for five consecutive years.

Widely recognized for his surgical expertise, Dr. Zemmel is often interviewed for his professional opinion and knowledge regarding various procedures. This has included being on The Doctors daytime television show for his work with a young man’s post-major weight loss contouring. Dr. Zemmel has also been quoted in an article by The New York Times regarding the virtual consultation platform Zwivel™, and interviewed by a reporter from CNN London.

Dr. Zemmel is pleased to regularly be featured in such esteemed publications, and attributes his high patient satisfaction to his practice’s focus on patients’ well-being. By prioritizing patients’ health and happiness, he believes he is able to create the most beneficial treatment plans that align with their goals. In response to his recent honors, Dr. Zemmel says he is proud to be recognized by his patients and peers for the high level of care his team strives to provide.

After earning his medical degree from the University of Virginia School of Medicine, Dr. Zemmel continued to the Virginia Commonwealth University Medical Center to train in his general and plastic surgery residency. He then entered private practice in Florida before returning to Virginia to found Richmond Aesthetic Surgery. Dr. Zemmel offers a comprehensive array of plastic surgery procedures at his practice—from surgical procedures like breast augmentation and tummy tuck surgery, to non-surgical treatments like BOTOX® Cosmetic. He is also involved with several medical associations, including being a Fellow of the American College of Surgeons and a member of the the American Society for Aesthetic Plastic Surgery, American Society of Plastic Surgery, and Medical Society of Virginia. Dr. Zemmel is available for interview upon request.